Cycle Shelters – Looking After Your Bike

Bike shelters can be found just about anywhere that people use bicycles. The shelters are typically found in schools where older pupils are allowed to ride bikes to school, and they are also found at workplaces where workers use them as a cheap form of transport that also provides good exercise. Wherever bikes are used in numbers that justify it, you are likely to find bike shelters erected to look after the bike.

Bike shelters take many shapes and forms. In general, they provide an area of shelter where a bike can be parked for a few hours, or longer, where it will be kept safe from the worst of the elements, and also where the machine can be safe from any criminal activity with a reasonable degree of certainty. Some bike shelters have more than just an overhead cover against rain, They may be in a kind of compound with a lockable gate for added security, and perhaps under the scrutiny of a security officer.

The materials that bike shelters are constructed from vary, depending on where the shelter is located and what degree of protection is required. The roofing part of a bike shelter is often clad in a material known as PETG. This is a thermoplastic polyester sheet. It is known for it tough characteristics, as well as its resistance to chemical intrusion. It is also very easy to form into intricate and difficult shapes through thermoform techniques.

Bike shelters can be obtained in a variety of different colours. It may be that a particular school wants its bike shelter in the school colours, or that a company wants the shelter in the same colours as the company logo, for example. This can easily be arranged by the company that supplies the shelter. The steel structure of the shelter can be painted in a particular colour, or the steel can be clad in a protective plastic wrapping of any colour desired.

Bike shelters are used where necessary to protect bicycles from the potentially destructive properties of rain and sun, depending on the season. They are used by schools and by large companies for pupils and workers respectively, as a safe place to park a bike while attending school or attending the work place.  In the future, cycle shelters should also become more common place in wider public areas as we move towards reducing our carbon emissions by using greener modes of transport.

At Miko, we pride ourselves on producing high quality, British manufactured goods to improve and complement any environment. Over the last 30 years, Miko have experience in supplying schools, hospitals, small and large businesses, and councils. Management at Miko work endlessly to develop strong relationships with our suppliers and buyers to establish the best products for your project, this allows for very competitive pricing with the highest quality materials.

Need to speak to us?

Request a call back today 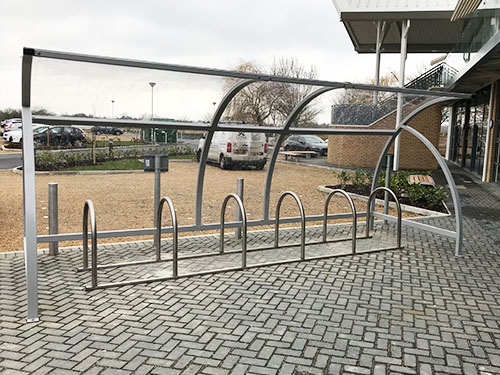 Need to speak to us?

Request a call back today